Five Takeaways From The Lukashenka-Putin Talks: Who Got What? 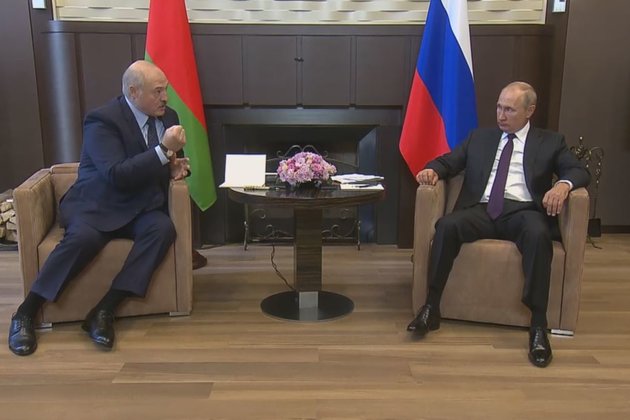 Vladimir Putin and Alyaksandr Lukashenka sat down for talks in Russia on September 14, their first one-on-one meeting between the two presidents since protests erupted in Belarus following a disputed election in which the authoritarian leader claimed a sixth term.

Lukashenka came into the meeting weakened, facing growing international condemnation and isolation over his government's violent crackdown on protests and the arrest of opposition leaders who contend that the August 9 election was rigged.

Putin, one of few international leaders to back Lukashenka, was probably hoping to use the meeting to extract further concessions, especially on deeper integration between the two countries based on a 1999 'Union State' treaty that remains largely on paper.

Grabbing headlines after the talks in the Black Sea resort city of Sochi was the news that Lukashenka had secured a $1.5 billion Russian state loan to keep his government afloat. But did he pay too high a price?

Here are five takeaways from the Sochi meeting.

Protests, strikes, and political upheaval have dealt a blow to the Belarusian economy, already reeling from the COVID-19 pandemic and what critics say has been the mishandling of the crisis by Lukashenka, who declined to put lockdowns in place.

Amid the uncertainty, Belarusians withdrew approximately $1 billion from bank accounts in August -- 17 times as much as the month before.

SEE ALSO: A Political Crisis Has Gripped Belarus. Is An Economic Crisis Next?

For Lukashenka, Putin's promised $1.5 billion state loan announced at Sochi will provide a much-needed financial injection, according to Franak Viacorka, a Belarusian journalist who is a digital-media strategist for the U.S. Agency for Global Media, which oversees RFE/RL.

'This is money that is urgently needed. This is cash. It's needed to pay off a previous loan, to pay salaries, maintain the hierarchy, and save the country from crisis,' Viacorka told Current Time, the Russian-language network led by RFE/RL in cooperation with VOA.

It's not the first time Putin has extended a wad of cash to a beleaguered ally in a bid to keep a neighboring country in Moscow's orbit. In 2013, as Ukrainian President Viktor Yanukovych was wavering over whether to sign an agreement strengthening Kyiv's ties with the European Union, Putin helped persuade him not to -- a decision that led to Yanukovych's ouster the following February -- by offering a $15 billion lifeline including a quick $3 billion loan.

The talks in Sochi came with joint Russian-Belarusian military drills taking place in Brest, in western Belarus near the border with NATO and EU member Poland. The exercises were due to run from September 10 to September 15 and include forces from Serbia, which backed out at the last minute due to European Union pressure. At Sochi, the Kremlin announced the drills would be extended to September 25. Furthermore, Putin and Lukashenka agree to hold 'almost monthly' joint military exercises in both countries in 2021.

The announcement was the latest hint from the Kremlin that Russia could be prepared to use force to back Lukashenka -- if it chooses to do so. On August 27, Putin said that a contingent of Russian security forces was prepared to deploy to Belarus if necessary.

In their numerous telephone talks, Lukashenka has said Putin has vowed to 'ensure security' in Belarus through the Russia-dominated Collective Security Treaty Organization (CSTO) and bilateral agreements.

Longer-term, the Kremlin has its eye on establishing a permanent military base in Belarus -- and the latest developments are likely to raise concerns among Lukashenka's opponents that Putin has advanced this cause. In 2015, Belarus balked at a Russian bid to set up an air base to host Russian Su-27 fighter jets. In September 2019, Russian Foreign Minister Sergei Lavrov said Belarus's refusal to host a military base had been an 'unpleasant episode.'

In Sochi, Lukashenka seemed at times to suggest that he did not need much help from Moscow. He downplayed the protests against him, which normally swell to some 100,000 people in Minsk on weekends, saying that Belarusians 'live an ordinary life' on weekdays and that on Saturday and Sunday 'we free up part of Minsk so that people can, if they wish, walk through this area.'

He suggested there was little or no threat to his rule and said that protesters had not yet crossed a 'red line' and spoke of what he said had been Putin's 'red line' in Chechnya, where the then-prime minister of Russia launched a war in 1999 that helped build his image and vault him to the presidency.

On the other hand, Lukashenka looked and sounded subservient, making several conciliatory statements regarding increased integration with Russia. He said that Belarus must remain close to its 'older brother' -- a reference to both Russia and Putin, who is almost two years older than Lukashenka -- and praising the Kremlin for demonstrating 'the border of Belarus are the borders of the Union State' and thanking the Russian president.

Sochi is Putin's turf, and the optics of the meeting -- filtered largely through Russian state media -- suggested which of the two was negotiating from a position of strength.

'The body language says far more in this case than the Russian language,' seasoned Swedish diplomat and Kremlin critic Carl Bildt wrote on Twitter, referring to footage showing Lukashenka leaning in eagerly and gesticulating at a seemingly disinterested Putin.

Bildt's tweet was one of many social media posts making roughly the same point.

Ahead of the meeting, Kremlin spokesman Dmitry Peskov said oil and gas cooperation, state debts, and other economic ties would be discussed, but no documents signed.

Few details emerged, leaving Lukashenka's critics to wonder whether he made concessions that went unannounced.