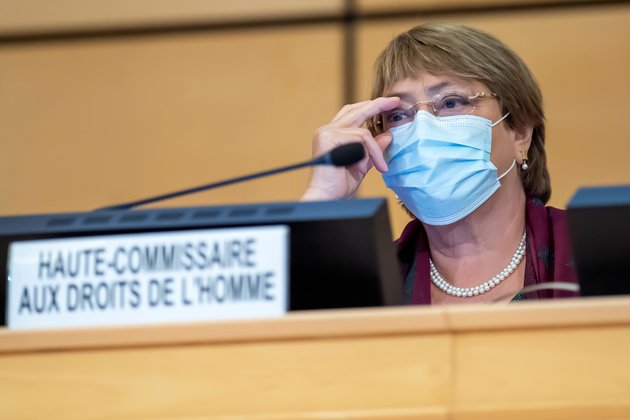 GENEVA - At its opening session, the U.N. Human Rights Council approved a proposal by the European Union to hold an urgent debate on the human rights situation in Belarus by a vote of 25 in favor, two against and 20 abstentions.

The European Union cited the steep deterioration of human rights in Belarus following the allegedly rigged August 9th election of President Alexander Lukashenko in its request for an urgent debate.

In her opening speech to the council, U.N. High Commissioner for Human Rights, Michele Bachelet validated these concerns. She said her office has been receiving alarming reports of ongoing violent repression of peaceful demonstrations, involving excessive use of force by law enforcement officials.

"Thousands of arrests, many of them apparently arbitrary, and hundreds of allegations of torture or ill-treatment, including against children, with some reports indicating sexual violence," said Bachelet. "Recently, abductions by unidentified individuals of people associated with the opposition have also been reported...There has been limited evidence of any steps by the authorities to address these reports."

Belarus' ambassador to the U.N. in Geneva, Yuri Ambrazevich, said the EU proposal was part of a broad political campaign aimed at supporting political forces in Belarus who had lost the election. He spoke through an interpreter.

"The proposal of the European Union has nothing to do with human rights," said Ambrazevich. "It is, however, aimed at rendering political pressure against the State of Belarus, which is a form of direct intervention in the domestic affairs of a sovereign State and is a gross violation of international law."

In her speech, Human Rights Chief Bachelet presented a bleak assessment of the human rights situation around the world. In rapid-fire order, she highlighted gross violations in dozens of countries in all regions of the world - violations which suppressed the rights and freedoms of people, impoverished societies, triggering violence and conflict.

The human rights records of a number of these States will come under review during the Council's three-week session. They include Cambodia, the Democratic Republic of Congo, Sudan, Myanmar, Ukraine, Venezuela, Syria, and Yemen among others.

The High Commissioner warns of ongoing political instability, social and economic upheaval and violence if the grievances, despair and inequality afflicting countless millions of people are not addressed.