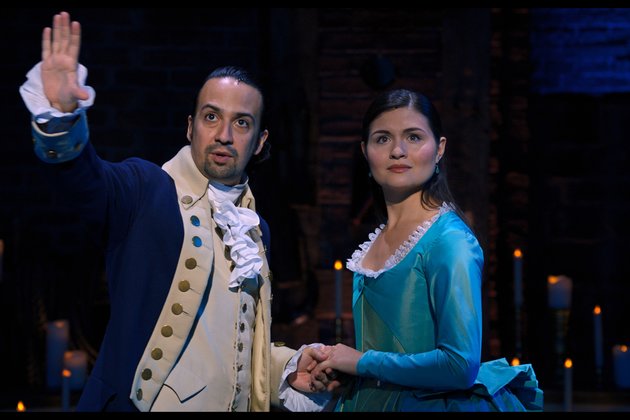 "The world turned upside down", proclaim the cast of Lin-Manuel Miranda's Hamilton (2016) after an epic retelling of siege of Yorktown, which led to the British surrender and the end of the American Revolutionary War.

In this song ("Yorktown"), Miranda's lyrics speak to huge societal change with standalone quotes such as "immigrants, we get the job done" and "we'll never be free until we end slavery". These catchy lines highlight the pro-migrant and anti-colonial themes in the musical. They also amplify Hamilton's most noted selling point: new representation of people of colour in American history.

In February 2020, Disney announced that it had purchased a recording of the original Broadway cast for approximately Pound 60m. This is believed to be the highest film acquisition cost of all time. The studio is now releasing the film, recorded across three performances, on Disney+, Disney's streaming service, to coincide with the Independence Day holiday on July 4.

As the Black Lives Matter movement gathers strength following the death of George Floyd, this may feel like a timely and topical return to a work that has emotional resonance and revolutionary sentiments. Yet, while Hamilton has been widely praised for its colour-conscious casting, the show isn't the model of anti-racist theatre it may seem. Within it lie issues relating to the erasure of Black and Indigenous people, marginalisation of female characters and revisionist histories of its characters' involvement in slavery.

A cast and crew of activists

The cast and crew of Hamilton have a track record of supporting anti-racist and related activist causes. One notable example is when the US vice president. Mike Pence. attended the Broadway musical in 2016 and was called out by actor Brandon Victor Dixon (who plays Aaron Burr) who said:

The single "Immigrants (We Get the Job Done)", originally released on the Hamilton Mixtape (recordings of the musical's songs performed by various artists), shared the 2017 Grammy Award for Best Fight Against the System. Miranda and Hamilton's musical director, Alex Lacamoire, helped produce the song "Found/Tonight", which is a mash-up of the song "You Will Be Found" from another hit musical Dear Evan Hansen and "The Story of Tonight" from Hamilton. Proceeds from the song were donated to the March For Our Lives protests following the Parkland school shooting in Florida in early 2018.

These and numerous other examples have connected Hamilton with the act of campaigning for marginalised voices. However, the musical is not without its issues.

The academic and gay rights activist Dennis Altman has highlighted how Hamilton builds on the beloved American Dream, where "anyone can find success". It's a romantic vision of how societies are supposed to function that complements the idea of overcoming systemic prejudices, including racism and sexism. But a close look at Hamilton shows how marginalised communities continue to be hidden or limited.

The musical ignores numerous examples of slave ownership. It fails to include "real-life" Black characters, including enslaved people, who are erased in lines such as "no one else was in the room where it happened". It also omits representation of indigenous Americans altogether. While no one would expect a single show to tackle every issue in existence, the contradiction between celebrating diverse casting without representing people of colour is apparent.

All men are created equal

There is also a clear difference in freedom of expression and representation for the women in Hamilton, who sing in only 14 of the 46 songs. Not only do they feature less, but they are also defined by their romantic connection to Hamilton: his wife Eliza, her older sister Angelica who is his true love and his mistress, Maria Reynolds. Eliza and Angelica's sister is jokingly known as "And Peggy", as she has no real connection with Hamilton and plays a small role in the story. This is also almost her only line in the whole production.

The relationship between Hamilton and his mistress is also problematic. Issues of consent in their affair are apparent. When Maria appears in Hamilton's office she asks for help because her husband is abusive, Hamilton lends her some money, walks her home and ends up in her bed. This is framed by Hamilton saying she looks helpless and the potential for sex is irresistible.

Sadly, this gender imbalance is reflected in the film's marketing. New posters for the Disney+ release represent Angelica, Eliza "and Peggy" in balletic, doll-like poses while the male characters are presented punching, leaping, and dancing. Meanwhile, Maria is not represented.

As Hamilton the film becomes widely available to stream, fans and critics are excited to voice their fandom and their frustrations. These conversations show how Hamilton challenges us to think about who is permitted to perform on our stages and what stories we are told. This musical allows us to conceptualise the power of retelling history while also showing that stories about Black and Indigenous Americans, and especially women, are still not given space in this process.