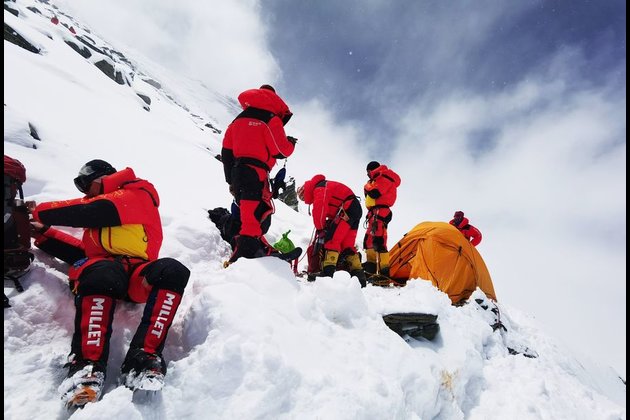 Beijing, May 22 (Xinhua) -- The world in the past 24hrs. A selection of the best daily press photos from Xinhua.

Chinese surveyors are on the way retreating to the advance camp at an altitude of 6,500 meters on Mount Qomolangma May 21, 2020.

The Chinese mountaineering team has further delayed its plan to reach the peak of Mt. Qomolangma on May 22 to accurately measure its height due to bad weather conditions. Located at the China-Nepal border, Mt. Qomolangma is the world's highest peak, with its north part located in Xigaze of southwest China's Tibet Autonomous Region. (Xinhua/Lhapa)

A member of TFL (Transport for London) staff member is seen at Acton North tube station in London, Britain on May 20, 2020.

The number of people claiming jobless benefit in Britain monthly soared by 69.1 percent in April as the labor market was hit by the COVID-19 pandemic, the Office for National Statistics said Tuesday. (Photo by Tim Ireland/Xinhua)

Photo taken on May 20, 2020 shows a view of the Tegel Airport in Berlin, capital of Germany.

The Tegel Airport, the largest in the German capital, was given permission to close its doors on June 15 due to low passenger traffic caused by the COVID-19 pandemic, the Berlin senate announced on Wednesday. (Photo by Binh Truong/Xinhua)

A man passes by a placard that says "Prevent against coronavirus" in Sao Paulo, Brazil, on May 20, 2020. (Xinhua/Rahel Patrasso)

Medical workers attend a training session provided by Chinese doctors and medical experts through a teleconference in Maputo, Mozambique, on May 21, 2020.

Chinese obstetricians and pediatricians shared their experience with Mozambican doctors Thursday on the prevention and treatment of COVID-19 among pregnant women and children through the teleconference at Maputo Central Hospital. (Xinhua/Nie Zuguo)

Mannequins with creations of local designers are seen in a restaurant in the Old Town of Vilnius, Lithuania, on May 21, 2020.

Cafes and restaurants became a platform on Thursday to showcase collections by local designers affected by the COVID-19 lockdown as the country has allowed bars, cafes and restaurants to operate under strict safety rules. (Photo by Alfredas Pliadis/Xinhua)

Photo taken on May 21, 2020 shows a beach in the COVID-19 pandemic in Dubrovnik, Croatia. (Grgo Jelavic/Pixsell via Xinhua)

Locals ride in a boat through floodwaters caused by heavy rains in Ratnapura, Sri Lanka, on May 20, 2020. (Photo by Gayan Sameera/Xinhua)

A commuter walks beside uprooted trees after severe cyclonic storm Amphan hit Kolkata, India on May 21, 2020.

Chief Minister of India's eastern state of West Bengal Mamata Banerjee said on Thursday that 72 people were killed in the state due to the severe cyclonic storm Amphan. The cyclonic storm triggering gusty winds up to 190 kilometers per hour and heave rainfall battered West Bengal and coastal Odisha Wednesday evening, flattening makeshift houses and uprooting electric poles and trees. (Str/Xinhua)

In this aerial photo taken on May 21, 2020, staff members with Yueshan section of China Railway Zhengzhou Group Co., Ltd. work on the cliff of Taihang Mountain in central China's Henan Province.

To ensure the safety of passing trains, the workers need to inspect moutains and remove dangerous rocks. (Xinhua/Hao Yuan)

A contestant participates in a Yuhua tea stir-frying competition in Nanjing, east China's Jiangsu Province, May 21, 2020.

Giant panda "Qingcheng" is seen at the giant panda house of a zoo in Anshan, northeast China's Liaoning Province, May 21, 2020.

Giant pandas "A'ling" and "Qingcheng", respectively from the China Conservation and Research Center for the Giant Panda Bifengxia Base in Ya'an and Qingchengshan Base in Dujiangyan of southwest China's Sichuan Province, were relocated to a zoo in Anshan on Thursday. They will make their public appearance after an adaptive phase. (Xinhua/Yao Jianfeng)