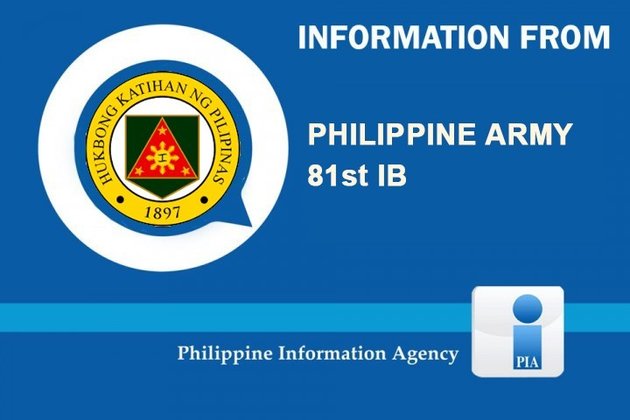 STA. CRUZ, Ilocos Sur, Feb. 14 (PIA) - A ranking army official cited the utmost support of the residents to the government troops on the latest neutralization of the three suspected members of the New People's Army (NPA) operating in Ilocos Sur on Thursday.

Lieutenant Colonel Rodrigo Marinas, Jr., the commander of the army's 81st Infantry Battalion, said the residents of Barangay Namatican, Sta. Lucia town have tipped-off the presence of at least five fully-armed suspected NPA rebels, who were reportedly having a meeting in one of the houses in the village. But, they were caught in a brief firefight with the responding joint army and police operatives.

"The manifestation of support of the villagers in Sta. Lucia town to the government troops is an off-shoot of the massive advocacy campaign on the concepts of the Executive Order (EO) 70 or the whole of nation approach to end the local communist armed conflict," said Marinas as he expressed his gratitude to the cooperating residents.

Marinas disclosed that at around 10:30 PM of February 13, 2020, when his troops received a report from the residents informing about the presence of at least five fully-armed suspected NPA rebels in the house of a certain Henry Dumag of Barangay Namatican, Sta. Lucia town.

Upon learning the report, Marinas led his troops and the police to the area to verify the veracity of the reports.

However, when they reached the area, they were fired upon by the suspected NPA rebels followed by the exchange of gunfires that resulted to the death of three persons. The three persons were later identified as Ka Goyo, the reported secretary of the Kilusang Larangang Guerilya Southern Ilocos Sur (KLG SIS) of the NPA rebels operating in the southern part of Ilocos Sur; Ka Aunor, the reported deputy secretary of KLG SIS, and one Maria Finela Cavero y Mejia alias Ka Ricky.

The cadavers of the suspected NPA rebels were immediately brought to the Acosta Funeral Homes for paraffin test and other examination for future references.

He said that hot pursuit operation to the other members of the suspected NPA rebels, who escaped during the encounter, is ongoing.

Marinas was deeply saddened due to the death of the three suspected NPA rebels during the encounter. This prompted him to reiterate again his call for the remaining NPA rebels all over the country to peacefully surrender to the fold of the government to avoid this kind of tragic incident for the sake of lasting peace and development. (JCR/FGL, PIA1)