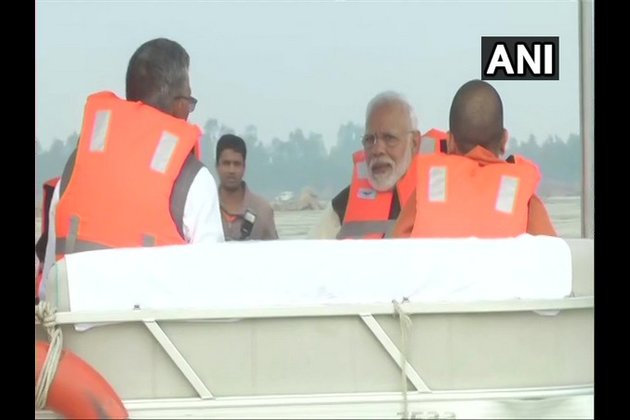 Earlier today, Prime Minister Modi chaired the first meeting of the National Ganga Council (NGC), aimed at reinforcing the importance of a 'Ganga-centric' approach in all departments of the concerned states as well as relevant central ministries.

During the meeting, he emphasised that an improvement framework for Nirmal Ganga would require the fullest cooperation from the public at large and greater awareness through dissemination of best practices from cities situated along the banks of national rivers.

Union Jal Shakti Minister Gajendra Singh Shekhawat was also present in the meeting.The Prime Minister also reviewed the progress of work done and deliberate on aspects of cleaning the Ganga.Kanpur has a population of more than three million spread over an area of 260 sq km. Though it has required treatment capacity, poor planning, lack of coordination among different departments, old damaged sewage conveyance infrastructure and lack of technical capabilities were resulting into inadequate treatment of only about 150-175 MLD of sewage and remaining untreated sewage was discharged into the Ganga through number of overflowing drains, including 140 MLD sewage flow from infamous Sisamau Nala.The pollution of river Ganga was compounded with the unregulated industrial discharges from around 400 leather tanning industries and inefficient and inadequate common effluent treatment plant (CETP).The National Mission for Clean Ganga (NMCG) has taken up the construction and modernisation of ghats and crematoriums including provision for public amenities for the towns on the bank of river Ganga.In order to improve cleanliness, silt removal and proper upkeep and maintenance of ghats, the NMCG has sanctioned a project for regular cleaning of all the 39 ghats at Bithoor and Kanpur at an estimated cost of Rs 6.07 crore. (ANI)