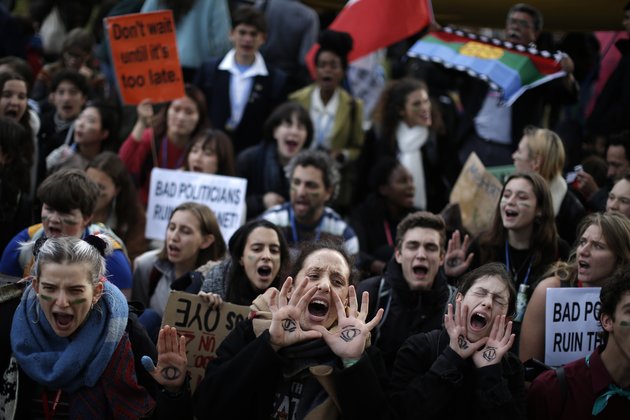 MADRID - Central American countries are teaming up to conserve the region's five great forests as part of a regional climate action plan released at U.N. climate talks in Madrid this week, the alliance behind the effort said.

The coalition of governments, indigenous people, green groups and others announced a plan to protect 10 million hectares of forests and degraded land inside those forests - an area roughly the size of Guatemala - by 2030.

In the last 15 years, three of the forests have been reduced by almost one-quarter in size, with illegal cattle ranching responsible for more than 90% of recent deforestation, it said.

Measures planned to safeguard the forests include bolstering agencies that look after protected areas, tracing beef to verify it has been legally produced, cracking down on cross-border cattle trafficking, helping ranchers find other ways to earn a living, and reforesting land where trees have been cut down.

Jeremy Radachowsky, regional director for the Wildlife Conservation Society, a partner in the project, said financing would come from multiple sources, including Central American countries, donor governments and a dedicated fund that will be created for indigenous and community forests.

The five forests, spanning from Mexico to Colombia, are key to curbing climate change as they sequester carbon dioxide emissions from burning fossil fuels that would otherwise heat up the planet.

"Nearly 50% of the carbon in Mesoamerica is stored in the five great forests," said Carlos Manuel Rodriguez, Costa Rica's environment minister, adding he hoped they would not be fragmented by deforestation.

The forests also provide habitat for wildlife such as the jaguar and scarlet macaw, the alliance said. The initiative aims to ensure no species go extinct.

The forests include the Maya Forest in Mexico, Guatemala and Belize; the Moskitia in Nicaragua and Honduras; the Indio Maiz-Tortuguero in Nicaragua and Costa Rica; the Talamanca region in Costa Rica and Panama; and the Darien in Panama and Colombia.

They provide water, clean air, food security and other natural resources to 5 million people, the alliance said, noting that indigenous and local communities manage nearly half of the forest area.

Candido Mezua of the Mesoamerican Alliance of Peoples and Forests, said it was sad to see the forests of the Amazon burning - and the impact that was having on indigenous people.

"In Mesoamerica, we have our five forests. They still exist. We can still protect them, and even expand them," he said in a statement.

Amazon indigenous leaders, meanwhile, said this week they would host a world summit in Ecuador next August aimed at protecting the Amazon rainforest and other ecosystems in "response to the environmental crisis in the basin and abroad".

Leaders representing 20 indigenous groups from Ecuador and Peru also called for global support to stop oil drilling and mining in the Amazon "Sacred Headwaters" region, an ecosystem rich in biodiversity that spans 30 million hectares in the two countries.

Deforestation in Brazil's huge tract of Amazon rainforest rose to its highest level in over a decade this year, government data showed in November.

The data confirmed a sharp increase in deforestation under right-wing President Jair Bolsonaro's government, which is considering permitting commercial agriculture and mining on native reserves.

Risks to Brazil's forests drew global concern in August when fires raged through the Amazon.

Scientists link the fires to deforestation, with people and companies cutting down the forest for timber and then setting fire to the remains to clear the land for ranching or farming.

Gregorio Mirabal, general coordinator of COICA, the biggest indigenous federation in the Amazon, said new ways were needed of dealing with threats to the Amazon, including the "devastating effects" of climate change.

At the U.N. climate conference, states "are making decisions for companies and not for the people", he said.

"The inability of our governments to solve this (climate) crisis is calling us to do this ourselves, hand in hand with the youth and any others in goodwill who want to join," he added.

Many indigenous groups are opposed to credits for forest protection being included in carbon trading markets, arguing it would damage their sacred lands and livelihoods, as governments haggle over new rules for those markets at the Madrid talks.

"We do not allow the commodification of nature or that it has a price. For us nature is of value as itself. It is our Mother Earth," Mirabal said.

According to the Washington-based Rights and Resources Initiative, which works on forest issues, up to 65% of the world's land is communally held by indigenous peoples and local communities and contains 80% of the world's biodiversity.

But only 10% of those groups' land rights have been legally recognized, it said.

"The local cultures and indigenous peoples are the ones that have best preserved nature, and we do not believe that solutions can exist without us," said Mirabal.

Indigenous groups - officially represented at the U.N. conference for the first time - have pushed for language on protecting their rights to be included in the text on carbon market rules that is under negotiation in Madrid.

But it is not in the latest draft as the talks near an end.

Indonesian indigenous activist Ghazali Ohorella said the rules should ensure safeguards for forest people's land and rights, as well as a complaints mechanism and opportunities for them to participate in decisions on carbon offsetting schemes. "If not, it will create so much trouble further down the line," he told journalists at the talks.