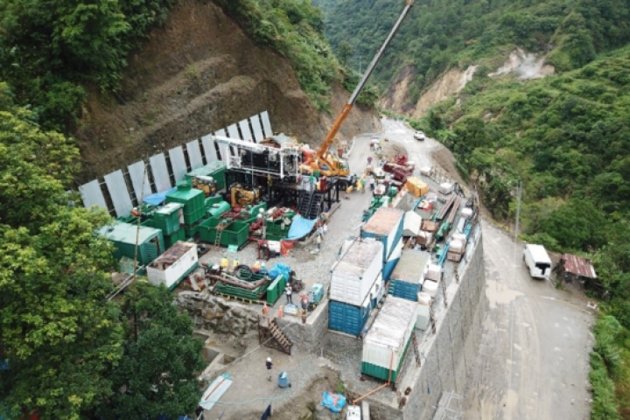 TABUK, Kalinga - The Kalinga Geothermal Project (KGP) is on track to complete the exploration phase with the drilling of two slimhole wells.

The Department of Energy (DOE) awarded the Renewable Energy Geothermal Service Contract to proponents Aragorn Power and Energy Corporation (APEC) and Guidance Management Corporation (GMC) on March 25, 2010 with a contract area of 26,139 hectares, spread out over the municipalities of Pasil, Lubuagan and Tinglayan.

The LF 230 coring drill rig and other drilling equipment were successfully mobilized and transported to the project site in Balatoc, Pasil with the cooperation and support of the local government units and concerned communities.

Victor Dugan of the KGP project team said that the exploration drilling has provided employment for over 50 local residents to work in various capacities.

To date, the project proponents have logged 350,000 man-hours of injury- free operations.

The project team has made an effort to engage and dialogue with the local leaders and host communities in the course of implementing the various exploration activities. These are designed to ensure that local stakeholders are informed on the status of the project and emerging issues are discussed and resolved freely and openly.

The KGP initiated the Kalinga Geothermal Scholarship Program in school year 2010-2011 to provide scholarship grants and educational assistance to deserving youths from the eight ancestral domains within its contract area.

As of school year 2019-2020, the program has extended scholarships to 351 grantees and produced 221 graduates in various courses. Five scholar graduates in engineering and geology have been hired for the project.

The KGP has been compliant with the required government permits including the Certificate of Non-Coverage secured from the Department of Environment and Natural Resources, and the Special Land Use Permit covering three well pads, and water permits from the National Water Resources Board.

In keeping with the Memorandum of Agreement with the indigenous cultural communities, a joint monitoring team has been constituted with representatives from the National Commission for Indigenous Peoples, Provincial/Community Environment and Natural Resources Offices, the council of elders, and the concerned provincial, municipal and barangay local government units.

Dugan said that there are various phases of geothermal exploration and development which, with the successful completion of the current exploration drilling, will hopefully allow for the declaration of commerciality and eventual field development.

He said that the results from resource assessment studies and exploration drilling will serve as basis in determining commerciality of the project.

The DOE awarded the Kalinga project a Certification as Energy Project of National Significance (CEPNS).

The KGP holds the distinction of being the first Renewable Energy Project to be granted a CEPNS by the DOE.