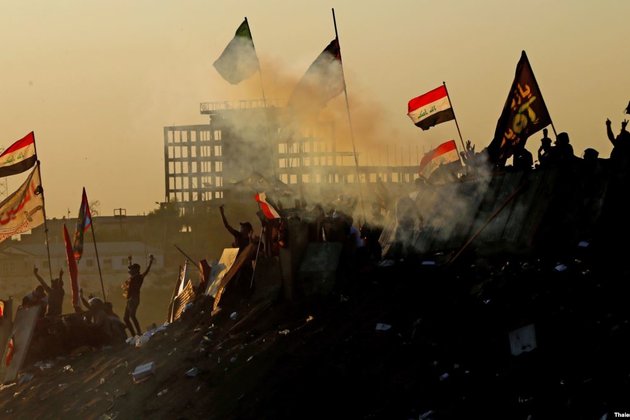 At least six people have been shot dead by Iraqi security forces in Baghdad and four others were killed in Basra as anti-government protests showed no signs of easing.

Police and medical sources said on November 7 that dozens of other people were wounded in clashes as protesters stepped up efforts to force the entrenched political elite to step down.

Demonstrators were attempting to remove barriers near two bridges that lead to the western bank of the Tigris River and allow access to the fortified Green Zone that houses government buildings and foreign embassies when they were stopped by security forces.

Gunfire was used against demonstrators staging a days-long sit-in in Basra, the center of the country's oil industry. At least four people were killed.

Clashes were also reported elsewhere in southern Iraq, including in the port of Umm Qasr, further disrupting the country's economy.

Umm Qasr receives most of the grain, vegetable oils, and sugar crucial to the Iraqi economy.

Authorities said that operations resumed on November 7 at the nearby Nassiriya oil refinery, which had been disrupted by protesters the day before.

The Iraqi government has been unable to quell the protests that have presented its biggest in years, shattering much of the calm that followed the defeat of the Islamic Stare (IS) militant group in 2017.

The crackdown against mostly unarmed protesters has led to the deaths of more than 260 people since October 1.

Demonstrators have expressed anger over the lack of jobs, shortages of power and clean water, poor education and health care, and overall corruption.

Many of the protests have been directed toward the heavy foreign influence in the country, including that of neighboring Iran, which has supported the Shi'ite militias in Iraq that helped defeat IS.

Baghdad has attempted to balance relations with Iran and the United States, which provides economic and military aid and also supported Iraqi forces in the defeat of IS.

With reporting by Reuters and Al-Jazeera