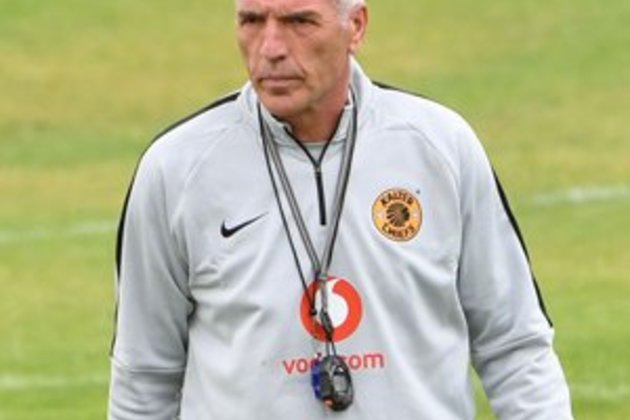 Speaking as joint guests on the SABC sports show Soccerzone, the two became involved in a heated exchange as they gear up to go head-to-head in the Shell Helix Ultra Cup on Saturday.

When speaking on Mosimane's claim to potentially "park the bus" in the exhibition clash, Middendorp made short shift of these apparent mind-games.

"I'm 100% sure that Pitso isn't a coach who would park the bus," Middendorp retorted. "He's making a lot of noise recently in different departments and therefore at this moment don't believe this one too."

Mosimane confirmed that his side would not take the encounter lightly and that they would be looking to come out on top as the two teams look to make a statement ahead of their Absa Premiership clash on October 27.

"A game between Sundowns and Chiefs is never a friendly game," Mosimane said. "The previous Shell Helix fixture showed that last year. We're going to be taking it very seriously, it's a serious game.

"And coach (Middendorp) is right, I've made a lot of noise. I thought that they don't hear the noise so I'm glad they got the noise.

A riled-up Middendorp shot back immediately by accusing Mosimane of speaking too much on Chiefs - the current Absa Premiership leaders - in an attempt to unsettle them, rather than focusing on his team.

"There's a lot of making a lot of noise, not on your team but making noise on other teams," Middendorp said. "What does that tell you? It shows that there must be respect and a bit of fear.

"I talk about my players, my team and that's it. I don't need to get into refereeing decisions and other decisions saying "this is not right".

"Sorry why are you doing this? Especially in such a position being the Absa Premiership champions."

The German's annoyance can be traced back to comments Mosimane recently made that Chiefs receive favourable decisions from referees.

"I must get a penalty also.

"Chiefs is benefiting from all the mistakes of referees, it's not about Chiefs but I'm highlighting the realities. Yes, it is true, no matter what it is true.