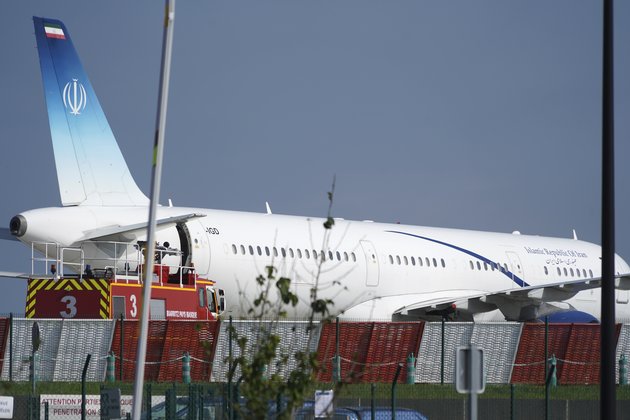 Iran's top diplomat, Foreign Minister Mohammad Javad Zarif, showed up Sunday at the French city hosting the G-7 summit of top world leaders, but there were no immediate plans for him to meet with U.S. officials while he is there.

Zarif's appearance in Biarritz, where U.S. President Donald Trump is meeting with leaders of six other countries, came as a surprise. When asked about the development, Trump had no comment.

But Zarif's visit was at the behest of French President Emmanuel Macron, who has had talks with his Iranian counterpart, Hassan Rouhani, about tensions in the Persian Gulf region that stem from Trump's withdrawal last year from the 2015 international accord aimed at restraining Tehran's nuclear weapons program.

Macron had met with Zarif on Friday in Paris before the summit opened, but invited him back to the Atlantic coastal town where the summit is being held after tense exchanges among the world leaders about Iran at their Saturday night dinner.

Asked about a possible Trump meeting with Zarif, a French diplomat said, "Not at this stage." But U.S. Treasury Secretary Steven Mnuchin noted that Trump has in the past not "set preconditions" on negotiations with Iran.

Macron had lunch with Trump on Saturday, and, according to French sources, outlined his plan to ease the West's tensions with Iran. The French leader is calling for allowing Iran to export its oil for a short time, fully implement the 2015 agreement, reduce conflict in the Gulf region and open new talks.

Macron has sought to salvage the international agreement, but Trump has accused the French leader of sending "mixed signals" to Iran over possible talks with Washington.

"Iran is in serious financial trouble," Trump said on Twitter earlier this month, because of the U.S. leader's reimposition of sanctions against Iran as he abrogated the accord.

"They want desperately to talk to the U.S.," Trump said, "but are given mixed signals from all of those purporting to represent us, including President Macron of France."