Washington Restaurants Urged to Cater to Muslims During Ramadan 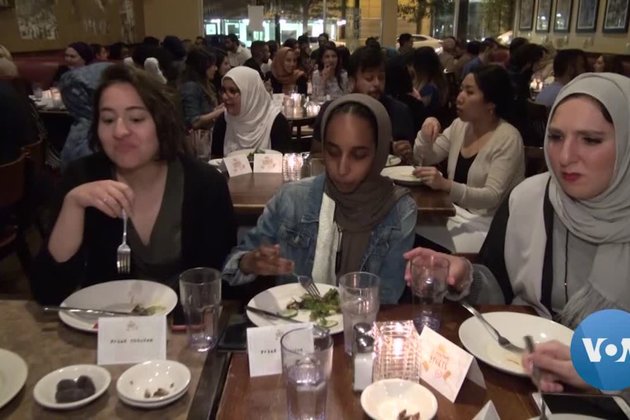 FALLS CHURCH, VIRGINIA - At a mosque in Falls Church, Virginia, outside Washington, a large number of Muslims are reciting evening prayers before they break their daily fast at sunset for Ramadan.

Afterward, some go home to eat Iftar, the daily meal shared with family and friends after fasting, while others break their fast at a restaurant. The problem with going out is that many restaurants close too early. That mostly leaves some 24-hour restaurants that serve fast food.

Now there is a new initiative to give Muslims in the Washington area more dining options during Ramadan, called Dine After Dark. The idea is for restaurants to open a couple of hours earlier or later during the holy month, to accommodate Muslims who fast from sunrise to sunset.

Dine After Dark a win-win

Katherine Ashworth Brandt, a graduate student at George Washington University and a Christian, came up with the idea.

Brandt said religious holidays like Christmas are celebrated, so why not Ramadan for people who belong to the third-largest religion in the United States?

In the Washington area alone, Muslims make up about 2% of the population, according to the Pew Research Center. Brandt thinks giving Muslims more places to dine during Ramadan, and restaurants more customers to serve is a win-win for everyone.

"I just want this to be a common business practice because I think it's the right thing to do," she said. "I think treating Muslim customers with respect and appreciation during their holiday season is something customers like and it's also good for business."

So far, only a few restaurants that are already open late have joined the effort, with the hope other eateries will follow.

Among them is a trendy local restaurant group called Busboys and Poets. Owner Andy Shallal hopes by calling attention to the issue that places now closed after dusk will join the Dine After Dark idea to extend their hours during Ramadan and make it a yearly habit.

"Me being a Muslim, I understand the significance of Ramadan, how important it is to people and families to come together and break bread together during this time," he explained. "It's not so much what the food is or what you are offering, it's really about being welcoming."

Some 80 people from the Muslim Writers Collective of Washington came to Busboys and Poets in downtown Washington to an Iftar to catch up and enjoy traditional food like halal chicken and vegetable dishes.

"I think it's a great idea to have restaurants open later since Washington is not a city that caters to people late at night," journalist Nesima Aberra said.

During entertainment on stage, local comedian Louie Al-Hashimi, made the group laugh as he talked about Muslim families.

"A lot of younger people move to Washington for jobs and might not have family nearby or know many people," he said. "Ramadan is a good time to get to know one another. So, the more places we have to eat together late at night, the better."

Shallal said he looks forward to the day when spending Iftar in restaurants as well as at home will be considered nothing out of the ordinary.