Trump Tells CIA US Should Have Stolen Iraq's Oil 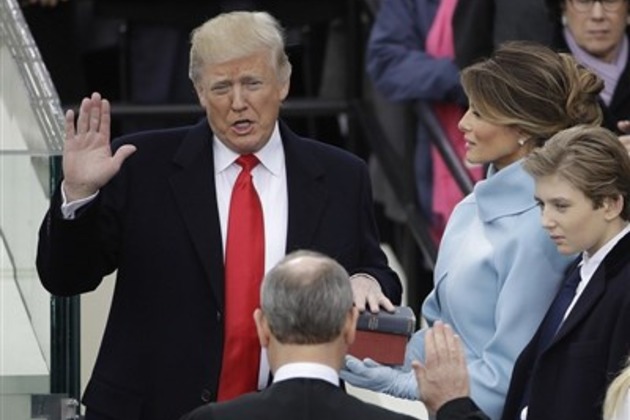 TEHRAN (Tasnim) - US President Donald Trump told the CIA on Saturday that Daesh probably would never have existed if the United States had seized Iraq's oilfields, a claim that flies in the face of the analysis of international law.

In unprepared remarks introducing his pick to lead the intelligence agency, Rep. Mike Pompeo (R-Kan.), Trump told CIA officials that when the United States went into Iraq, we should have "kept the oil."

"Now I said it for economic reasons," Trump said. "But if you think about it, Mike, if we kept the oil, you probably wouldn't have ISIS (Daesh) because that's where they made their money in the first place, so we should have kept the oil. But, OK, maybe we'll have another chance."

It's a claim that Trump repeatedly used on the campaign trail. But the president's willingness to tell the CIA 8213; and, indeed, the international community 8213; that he thinks the United States should have looted a country's resources is a new mark in foreign diplomacy and yet another signal that there will be no shift to more responsible rhetoric now that Trump represents the country as its leader.

The strategy of taking Iraq's oil is plainly in violation of multiple international laws and United Nations agreements.

Politifact looked into this claim from Trump in September and found a number of reasons why taking Iraq's oil, as Trump advocates, would be illegal, the Huffington Post reported.

"What Trump seems to be advocating here would be a fundamental violation of international law embodied in numerous international agreements and in recognized principles of customary international law," said Anthony Clark Arend, a Georgetown University professor of government and foreign service.

Specifically, Arend cited the Annex to the Hague Convention of 1907 on the Laws and Customs of War, which says that "private property ... must be respected (and) cannot be confiscated." It also says that "pillage is formally forbidden."

In addition, Arend said, the 1949 Geneva Convention Relative to the Protection of Civilian Persons in Times of War provides that "any destruction by the Occupying Power of real or personal property belonging individually or collectively to private persons, or to the State, or to other public authorities, or to social or cooperative organizations, is prohibited, except where such destruction is rendered absolutely necessary by military operations."

Richard D. Rosen, the director of Texas Tech University's Center for Military Law and Policy, added that Trump's idea "appears to constitute aggression of the type condemned by the United Nations by resolution in 1974." The resolution states that "any military occupation, however temporary, resulting from such invasion or attack, or any annexation by the use of force of the territory of another State or part thereof" qualifies as an "act of aggression."

Arend said the only way he could envision an idea like Trump's being acceptable under international law would stem from sanctions imposed by the UN Security Council. But that would be moot in this case since the 2003 Iraq War was not undertaken with the approval of the Security Council.

Foreign policy experts also seem to think taking Iraq's oil would neither be feasible, nor desirable.

Experts cited the long-term damage to the United States' reputation as an imperial force seizing the natural resources of countries, as well as the practical challenges in actually taking a country's oil. Devoting such a large number of troops to pillaging oilfields and protecting oil pipelines and transportation routes would require a more permanent presence in Iraq and far more troops than the United States has available.

It's also difficult to see how looting oil would better US standing in Iraq and not lead to more extremism.

But hey, in Trump's words, "maybe we'll have another chance."